Many rely on St. Clare Medical Outreach for care 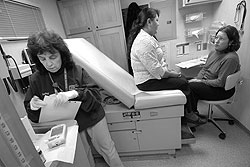 Sardar Zaman gets emotional when he talks about his doctor.

Two years ago, the 73-year-old native of Pakistan had a history of heart disease but no money to pay for the regular health care he needed.

The Cockeysville resident, who moved to the U.S. in 2002, had been crossing his fingers and taking his chances with his health. Then, in 2005, he heard about the St. Clare Medical Outreach Program of St. Joseph Medical Center in Towson.

The program began in 1998 to provide health care for the underserved in Baltimore. The program sends a recreational vehicle, fully outfitted with a functioning physician’s office, to needy areas of the city several times a week.

The project serves the large Hispanic population in Fells Point and the homeless population at Maryland Avenue and 23rd Street, at the Franciscan Center soup kitchen.

Last year it served 1,835 patients with free medication, primary health care services and even surgery — St. Joseph surgeons donate their time, and the hospital takes care of the rest.

A little over a year ago, Zaman received an angioplasty through the program. He still meets the RV at the Hispanic Apostolate on Broadway in Fells Point for primary care.

“I was just telling these people,” said Zaman, indicating his physician and the nursing staff, “I will remember you people forever, as long as I will be alive.”

What began in 1998 as a program to provide health screenings, immunizations and similar services to the needy evolved to include primary care services, said Bernadette White, the program director. Primary care was the intention all along, White added.

The project’s popularity is growing, according to its operators. The program saw more than 1,800 patients last year after seeing 1,600 the year before.

The Hispanic Apostolate was chosen as a site because of its popularity among the immigrant population, White said. Whether legal or not, immigrants face unique challenges in accessing health care, including a long waiting period before they are eligible for medical assistance programs.

“It’s part of our mission to serve the underserved,” said White. “It is a very visible expression of the mission of St. Joseph Medical Center — loving service and compassionate care.”

Perhaps the program’s most visible asset is the beige RV emblazoned with the St. Joseph Medical Center name in colorful letters on its side. It sits parked on heavily trafficked Broadway every Tuesday and Wednesday and on West 23rd Street on Thursdays.

It looks like any other doctor’s office on the inside, though a little cramped — two small exam rooms, nondescript pink wallpaper, rows of medical files lining the walls.

The program is staffed with two physicians, a team of nurses and nurse practitioners—some part time, others full time.

“It really takes special people to work in confined quarters like that,” said White. “It is very different working on a converted RV. They are very committed to helping all the people that they come in contact with.”

The project now has an annual operating budget of about $500,000, funded through grants and donations, including money from the hospital’s foundation.

The cost of surgery, if that is necessary for patients, is shouldered by the hospital and described as charity care. In 2006, St. Joseph provided nearly $4.5 million in such charity care.

The doctors and nurses on the coach see a fair amount of chronic illnesses, White added, including diabetes, heart disease and lung disease. Among the immigrant population at the Hispanic Apostolate, the muscle pains and strains associated with manual labor abound, she added.

One Tuesday afternoon this month, the coach and its staff braved a snowstorm to make the scheduled appearance in Fells Point.

The exam rooms were full, and Zaman’s wife, Zakia Begum, spoke with a nurse about her diabetes in the cramped reception area.

As patients arrived for their appointments, they warmly greeted Dr. Marcio Menendez, the program’s medical director.

Menendez, now 72, began working with the St. Clare project as a volunteer in 2001 after having retired from his private cardiology practice. Shortly thereafter, he signed on as an employee.

A native of the Dominican Republic, he speaks Spanish fluently. Most of the staff have some grasp of the language as well.

“My being Hispanic, I try to help my people,” Menendez explained of his work with the program. “I think I get more out of it than the patients.”

Many of the patients, he said, would have no place to go without the program.

“We’re very unique,” agreed registered nurse Kathy Geiman, who has been with the project since its inception.

When their RV is parked on Broadway at the apostolate, the St. Clare staff is just around the corner from where St. Joseph was founded in 1864, White noted.

“We’re returning to the roots of where St. Joseph Medical Center began,” she said.