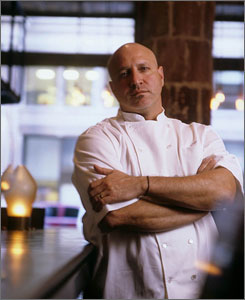 Could you cook a gourmet meal for four on only $10?

If the answer’s No, don’t feel bad – neither could a round-up of celebrity chefs selected by Time magazine for a feature on eating gourmet meals during economic crunch time.

But, they came in pretty close.

The head judge finally settled on a pork loin ($4.49), spaghetti ($1.34) with fennel, eggplant, zucchini, onion and a can of tomatoes ($6.05 collectively). Although he spent only $11.88 on the meal’s main ingredients, Colicchio used some basil, a bit of parmesan cheese and, of course, cooked liberally with olive oil and garlic. The result: Fennel Pork Loin and Pasta Vegetarienne.

If Colicchio’s pork-and-pasta fare isn’t your cup of tea, there are five more recipes to chose from:

There’s a clear trend of what was used (pasta, chicken) and what was not (red meat).

Harry Balzer, who tracks food trends for a market-research firm, told Stein: “We’re seeing less meat and more pizza, sandwiches, Italian pasta and casserole-type dishes. The real change that occurred in the last bout of inflation was that one of the cheapest meats became more popular: chicken.”

Personally, I’m going for the banana flambe – with fire extinguisher at the ready.

×
Enjoy This Free Article.
We Have 2 More For You.
All You Need To Do Is Register To Receive Your 2 Additional Free Articles.
food Recession 2:12 pm Thu, July 10, 2008 Maryland Daily Record
jackie.sauter