Lose your job — but not the shirt off your back 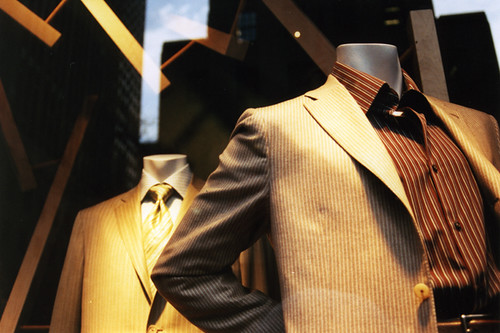 Good idea or bad idea? Jos. A Bank announced a program Monday that will refund the price of a suit if the purchaser loses his job — and allows him to keep the suit.

“At Jos. A. Bank we understand the uncertainty everyone is facing,” said CEO R. Neal Black, in a statement. “We want to help the customer look good at work, and if he loses his job, to be dressed appropriately as he meets with his next employer. It’s like giving all of our customers a bit of unemployment insurance.”

There are some catches though: the full rebate applies to suits purchased during the company’s $199 sale from March 16 through April 9 and only to customers who lose their jobs during those weeks. If the customer is laid off April 16 through July 1, the company will refund up to $199 or the cost of the suit if it is less, and the customer can still keep the purchase. For more details, visit the Web site.

The 651,000 jobs lost in February wasn’t quite as bad as January’s loss — 655,000 jobs — but if the trend continues, a total of 1.5 million to nearly 2 million more jobs could be lost by July 1. If even a small percentage of those jobs are people who ran out to buy a Jos. A. Bank suit, the Hampstead-based clothier could have a lot of refunds on its hands in the coming months.

However, if a greater number of people run out to buy suits and don’t get laid off, then the promotion is a win for the company.

Either way, the idea could drive traffic to the stores but is this a gamble you would take as a business owner?

×
Enjoy This Free Article.
We Have 2 More For You.
All You Need To Do Is Register To Receive Your 2 Additional Free Articles.
clothing jobs JoS. A Bank Recession Retail 1:42 pm Mon, March 16, 2009 Maryland Daily Record
Liz Farmer