Minus the question mark, that’s the theme of this year’s National Tourism Week that began Monday. So I spoke to Nancy Hinds, the Baltimore Area Convention and Visitors Association vice president of public affairs, this morning about why tourism matters in Baltimore. 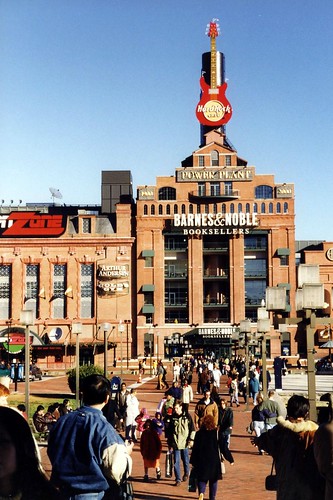 Hinds pointed out that the backlash corporations that got stimulus money — such as AIG —  have received for going on corporate retreats has negatively affected the tourism industry. Companies are now afraid to spend money on corporate travel or meetings because of the frivolous image that may portray.

“Look at whats it’s done to Las Vegas and other incentive luxury destinations,” she said, referring to the economic depletion of the once-bustling gambling mecca. While that hasn’t affected Baltimore in the same way because we’re not an “incentive travel destination,” it’s still changed spending on the corporate level here.

“So that’s the mission,” she said. “Meetings matter. Congress may say otherwise because it’s a feel-good, public relations comment but you don’t realize the impact that’s having on destinations.”

BACVA is hosting an event tonight at the Maryland Science Center to highlight tourism’s impact on the city’s economy and to celebrate the five-year anniversary of the new visitors center.

“Tourism is big business,” said Hinds. “This is not just luxury travel by a few CEOs.”

I suppose Baltimore’s been lucky in the sense that — for once — the city’s image as a non-luxury destination has come in handy. You play the cards you’re dealt and in this particular round, the less glitzy cities are doing better.

BACVA is still compiling its 2008 tourism numbers, though. I wonder if that theory will hold up when they are released?

×
Enjoy This Free Article.
We Have 2 More For You.
All You Need To Do Is Register To Receive Your 2 Additional Free Articles.
Baltimore Tourism 12:31 pm Thu, May 14, 2009 Maryland Daily Record
Liz Farmer