I’m probably the last person who needs to be told sporting events today are about WAY more than what’s happening on the field.

I never thought I would see this phrase in an article about Tiger Woods and other top golfers: “…he will undoubtedly wear white pants and a blue shirt with a white piping stripe, according to the clothing script provided to him…”

Ugh. I expect this from tennis. But golf? It’s pants and a polo, for crying out loud! 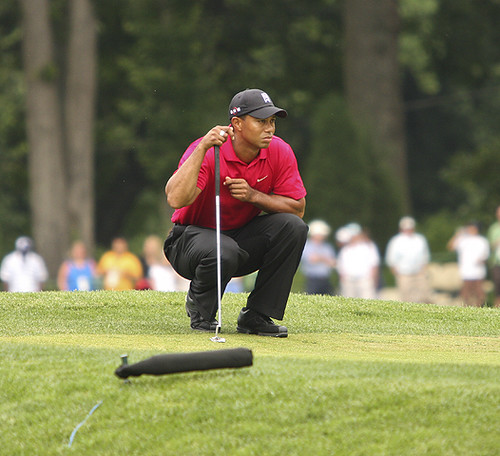 Fashion’s not my thing — but can I appreciate marketers seizing an opportunity and milking it for all it’s worth? Absolutely. And apparently, that is what’s going on with the PGA Tour and golfers Woods, Sergio Garcia, Lucas Glover and Kenny Perry.

With these guys on television for hours, their apparel sponsors have started telling them what to wear and coordinating the timing with new clothing releases in their retail stores.

“What Woods wears each day at every major championship this year has been scripted for him by his sponsor Nike since last summer,” wrote the New York Times. “To ensure that retailers have a new design or color modeled by Woods on their shelves this weekend, Nike had its first meetings about Woods’s 2009 British Open wardrobe 17 months ago.”

The same goes for the other guys. On Saturday at the British Open, Garcia will wear the white pants and blue shirt with white piping by Adidas, Perry a navy plaid print shirt and light khaki pants by Adidas and Glover will sport a bright yellow Nike shirt with gray pants.

“A single shirt worn by one of our athletes on a Sunday afternoon winning a tournament can raise sales 10 percent,” Tiss Dahan, senior director of global apparel at Adidas Golf, told the Times.

Pretty impressive. And since sports and fashion are two of the biggest money-making industries in the country, it’s something that was bound to happen.

But can we draw the line there? I don’t want to think about the implications of skin care products also getting in on the fun on the fairway. If I ever see Tiger Woods pull out a bottle of Olay sunscreen and start re-applying, I’m turning the channel.

×
Enjoy This Free Article.
We Have 2 More For You.
All You Need To Do Is Register To Receive Your 2 Additional Free Articles.
Adidas golf Marketing Nike Tiger Woods 10:27 am Tue, July 14, 2009 Maryland Daily Record
Liz Farmer