How safe is Camden Yards?

All right, before you start freaking out over that subject line, I’m sure Camden Yards is perfectly safe. But it did get you to click on this post, didn’t it? 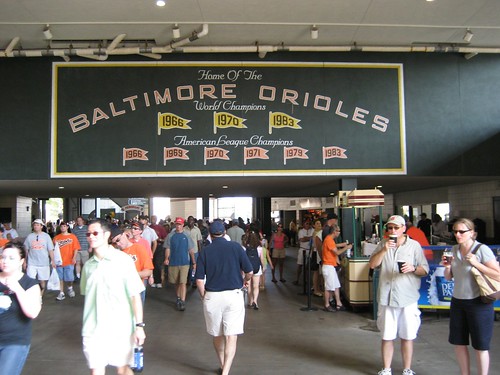 But as for the question at hand, we may have a specific answer in a few months after a safety study on the ballpark is finished. The Maryland Stadium Authority recently hired Chicago-based Hillard Heintze to conduct a comprehensive security threat and vulnerability assessment of the Camden Yards Sport Complex (which includes the ballpark, the warehouse and M&T Bank Stadium).

Stadium Authority officials at their last public meeting mentioned that the impact the sports complex’s proximity to D.C. was an element they wanted covered.

But here’s my question — what about the little things? The last several times I’ve gone to either ballpark (D.C. or Baltimore), I’ve noticed the bag check at the security has gone a little lax. So far it’s just encouraged me to try and sneak food into Nationals Park (thank you O’s for letting me bring in my own food without the risk of getting mustard on my wallet).  But what kind of tricks could ill-intentioned people pull?

And the same does not go for football games — especially the Ravens, which seems like the equivalent of going through airport security. At least it is for the guys…finally a perk to being a woman that involves shorter lines!

What’s your assessment as a fan of the security at sporting games? Are some venues in this region better than others?

×
Enjoy This Free Article.
We Have 2 More For You.
All You Need To Do Is Register To Receive Your 2 Additional Free Articles.
Baltimore baltimore ravens Camden Yards Maryland Stadium Authority Orioles security 11:55 pm Sun, September 20, 2009 Maryland Daily Record
Liz Farmer