UPDATE:  Nike is now denying that it has entered into a new endorsement deal with Michael Vick. See Liz Farmer’s updated blog here.

His is the fourth-highest selling jersey in the NFL this year — I’d guess you’d have to be insane to pass up on the opportunity to cash in. 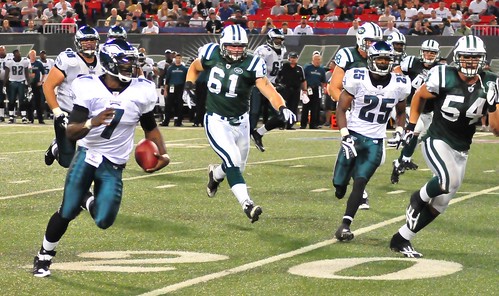 Nike, which dropped then-Atlanta Falcons quarterback Michael Vick in 2007 after he plead guilty to running an interstate dog fighting ring, has resigned the reinstated QB who now plays for the Philadelphia Eagles. After his release from prison this summer, questions abounded about Vick’s ability to repair his image, get back into the league and be a starting player once again.

Seems we’re getting closer to those answers.

After serving his league suspension, Vick played last Sunday and took a few snaps for Kevin Kolb, who was starting in place of an injured Donovan McNabb. He threw two incomplete passes and ran for 7 yards, but the fans seemed to embrace him.

Reinstatement into the NFL? Check.

I saw a Vick jersey last Sunday at Delaware Park’s sports betting book. When I asked him why he bought it, he had this “Well, why wouldn’t I buy it?” look on his face.

“It’s his first time back today,” he said.

Apparently that’s good enough for fans…which is good enough for Nike. I get that. Image rehabilitation? I wouldn’t say “check,” but we’re on our way. Wonder what other former sponsors will come crawling back? AirTran? EA Sports?

But not everyone feels Nike’s being sensible. Check out Charles Robinson’s column on Yahoo! Sports for his view on why Nike’s move is hypocritical after the company basically scorned Vick in 2007.

What’s your take on Nike climbing on board with Vick?

×
Enjoy This Free Article.
We Have 2 More For You.
All You Need To Do Is Register To Receive Your 2 Additional Free Articles.
advertising branding football Marketing Michael Vick NFL Nike 11:59 am Thu, October 1, 2009 Maryland Daily Record
Liz Farmer