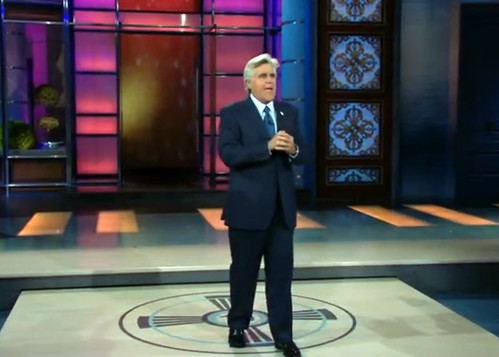 So how bad is Jay Leno’s new show? It’s so bad, a broadcast consultant told me he’s been calling local stations to try and assuage their fears about ratings. (In my story on television news, I wrote about the “Leno Effect” — his show’s poor ratings are hurting the 11 p.m. local television newscasts that follow.)

I’m sensing a theme here…maybe Leno needs to add some crime skits to pique viewers’ interest. But that’s not why his show was in Baltimore recently — check out this skit done in Baltimore that aired on Leno’s show last week. (My favorite part is the shot of the lady in the soup shop with a tear streaming down her face.)

The gist of this vignette is Leno lackey Owen Benjamin goes around town to different businesses and creates a one- or two-verse jingle about their store.  The Leno Show has created similar videos for other major cities around the U.S. and it appears as if it’s another way to pander to the major markets where Leno might be able to boost his ratings.

But if you’re not watching the show already, would watching the Baltimore video make you tune in? Seems to me the only thing that could save his show at this point is some kind of wardrobe malfunction or a Jerry Springer-esque mishap to get audiences buzzing and tuning in for the next meltdown.

But then again, as Ari Gold (Jeremy Pivon’s character) said on HBO’s show Entourage — “Drama, this is NBC. They gave ‘Joey‘ 46 episodes.”

×
Enjoy This Free Article.
We Have 2 More For You.
All You Need To Do Is Register To Receive Your 2 Additional Free Articles.
Baltimore media NBC ratings 5:20 pm Thu, November 19, 2009 Maryland Daily Record
Liz Farmer