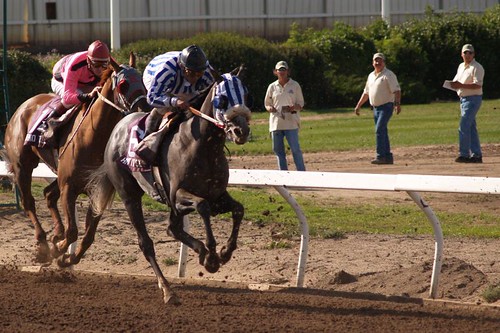 In 2010, Maryland will only have two Grade I stakes races. In another display of how the state’s quality of racing has declined in recent years (thanks to better competition and bigger purses from our slots-wielding neighbors), the annual Frank J. De Francis Memorial Dash has been downgraded to a Grade II race.

Now the Preakness Stakes, the middle jewel of racing’s Triple Crown, and the historic Pimlico Special are the only remaining Grade I races in Maryland. Both races are run at Baltimore’s Pimlico Race Course in May.

“It is disappointing,” said Maryland Jockey Club racing secretary Georganne Hale in a statement. “They look at the races over a four-year period with the number of Grade I winners in the race. Our average was 1.4 but with so few Grade I sprints, how many Grade I winners can we attract?”

It was one of five races downgraded from Grade I to Grade II. Of the 723 unrestricted U.S. stakes races with a purse of at least $75,000, 487 of them were assigned a graded status this year by the American Graded Stakes Committee.

Fifteen graded races were upgraded and 23 were downgraded, including the De Francis Dash and Pimlico’s Miss Preakness Stakes, which went from a Grade III to ungraded.

Seem pretty clear to me — this is a message from the committee that the only thing really holding up horse racing in Maryland at this point is the Preakness Stakes. This year wagering on Preakness Day made up just over HALF the total wagering done for the spring meet at Pimlico. That’s pretty lop-sided if you ask me.

Also, the Pimlico Special was canceled in 2009 for the third time this decade because of (yet again) a purse shortage. Seems like the only thing going for the race at this point is having the distinction of holding the “Race of the Century” between Seabiscuit and War Admiral more than 70 years ago.

Will Maryland horse racing in the eye of the general public ever again be more than just Preakness?

×
Enjoy This Free Article.
We Have 2 More For You.
All You Need To Do Is Register To Receive Your 2 Additional Free Articles.
Baltimore horses Laurel Park Pimlico Race Course 1:26 pm Fri, December 4, 2009 Maryland Daily Record
Liz Farmer