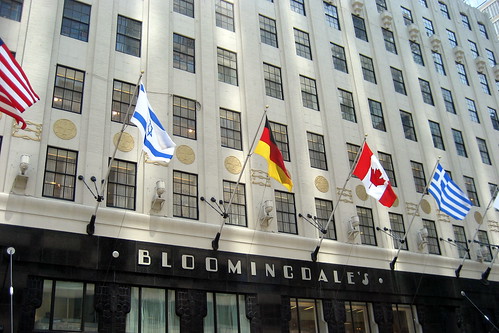 How desperate are high-end retailers? They’re so hungry for customers this holiday season, they’re willing to literally give away thousands of dollars to shoppers who buy something from their Web site.

The promotion is called “Mystery Money” — those who are on stores’ e-mail lists are sent a gift card number, but the dollar amount isn’t revealed until online checkout. The gift cards range from $20 to $1,000, and stores like Saks Fifth Avenue and Bloomingdales are sending e-mails to their customers encouraging them to shop online to see what their gift card amount is.

After a couple tries this morning with TDR’s Danielle Ulman, we figured the gift card amounts are based on what you spend — if you pop a $140 make-up cream in your online shopping cart, you’ll get $20 off at checkout. If you spring for a $500 pair of shoes, you’ll get $50 off. In other words, it’s just like a percentage discount coupon…only it sounds nicer.

Bloomingdales is actually a little less mysterious than Saks — their e-mail promotion (which is for Wednesday only) gives you the option to enter your gift card number and see what the amount is before you start shopping. We tried that too…and came up with $20. Good luck finding anything at Bloomingdales remotely close to that amount!

All in all, the promotions reek of desperation. And why not? Macy’s which owns Bloomongdales, lost $35 million last quarter. And aside from the second quarter this year (from May through July), its net income line has been in the red for more than a year.

Saks hasn’t done much better. Saks Inc. made $6.3 million last quarter but that was the first gross profit the company had made in more than a year. It lost more than $59.3 million during the second quarter this year. The company also announced Wednesday it is cutting 116 jobs at its flagship store in New York.

Meanwhile, how is competitor Nordstom doing? Thanks to a boost in online sales and sales at its off-price alter ego, Nordstrom Rack, the company posted a 2.2 increase in year-over-year sales in November and its net income has ranged from $68 million to $105 million over the last year.

Seems like the public has spoken — a $2,000 handbag just isn’t cutting it anymore.