Vick to get courage award, NFL fans in Baltimore upset 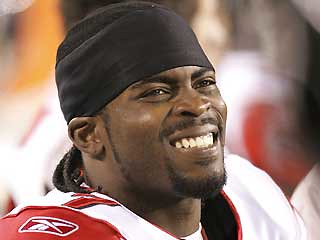 Some fans in the city are upset over the Philadelphia Eagles’ choice for their award recipient, Michael Vick. (The Ed Block Courage Award is given to NFL players who have been selected by their teammates. The team selects someone from their squad they believe exemplifies a commitment to sportsmanship and courage, according to the foundation.)

According to The Baltimore Sun, animal lovers in Baltimore plan to protest the press conference that officially announces the 32 players set to receive the award this year. The Baltimore Ravens, by the way, selected Dawan Landry as their 2009 winner.

In case you were under a rock this summer, Vick was released from prison after serving two years for his role in a brutal dog-fighting operation and signed with the Eagles in August. Those upset about Vick getting the award say the Eagles’ selection is offensive and Vick in no way reflects the intention of the award.

“The Ed Block Courage Award Foundation is an NFL-supported charity dedicated to recognizing courage in the League while improving the lives of abused/neglected children in NFL cities throughout the country,” according to the foundation Web site. Ed Block was the longtime head athletic trainer of the Baltimore Colts, was a pioneer in his profession and a respected humanitarian, the Web site says.

Do you think Vick getting this award is out of line?  On the one hand, he’s served his time, he’s now working with the Humane Society and does seem to be turning his life around. On the other hand, it’s only been two years — is it too soon to start congratulating Vick and forget his past?

×
Enjoy This Free Article.
We Have 2 More For You.
All You Need To Do Is Register To Receive Your 2 Additional Free Articles.
Baltimore eagles football Michael Vick NFL Public Relations 12:11 pm Tue, December 29, 2009 Maryland Daily Record
Liz Farmer