Md. jockey to be in ‘Secretariat’ 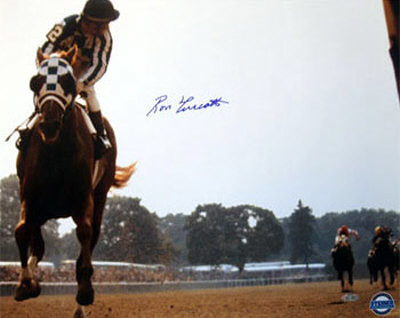 Maryland jockey Grant Whitacre will be portraying Paul Feliciano in the movie “Secretariat,” which is slated to be released in the fall. Feliciano rode the 1973 Triple Crown winner in his first two career starts as an apprentice, before the more experienced Ron Turcotte took over.

Secretariat is considered by many to be the best race horse of all time. Mayhem Pictures, with the backing of Walt Disney Pictures, is producing the movie. The companies have collaborated before on sports pics like “Miracle” and “The Rookie.”

(Side note: I have yet to see a sports movie where I don’t get a little weepy — especially a Disney one. When I saw “Miracle” in the theater I was frantically dabbing at my eyes during that final big scene and praying nobody noticed. Those folks at Disney definitely have my number. So, I will be seeing Secretariat when it’s released, it will get a little dusty in the theater and this time I’m bringing Kleenex.)

Whitacre got the job after responding to a casting call in Timonium last year. He got to rub shoulders with some pretty impressive Hollywood company during last fall’s shoot — Diane Lane is playing the owner Penny Chenery (the housewife-turned-champion-breeder), and John Malkovich is cast as the trainer Lucien Laurin.

As for Whitacre in real life, the 24-year-old had a breakout year in 2009. After battling injuries for the first three years of his career, the former Atholton High School baseball player established himself as a reliable rider, ranking seventh in the overall standings last year at Pimlico and Laurel Park. In September, he had the signature win of his career with a victory aboard Sumacha’hot in the Jim McKay Maryland Million Classic.

This weekend, Whitacre was diagnosed with a small hairline fracture in his lower back after being tossed from his mount, Blue Wren, in Saturday’s race at Laurel. He is expected to miss two to six weeks.

×
Enjoy This Free Article.
We Have 2 More For You.
All You Need To Do Is Register To Receive Your 2 Additional Free Articles.
disney entertainment film Laurel Park 11:55 am Mon, January 11, 2010 Maryland Daily Record
Liz Farmer