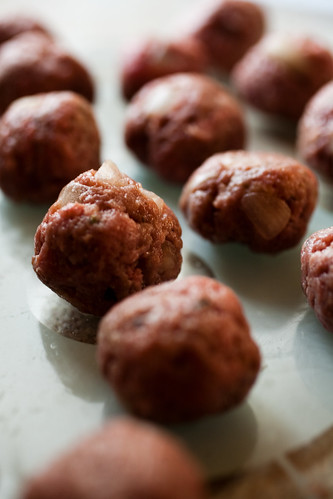 Of course there are many more fancy things on the menu at Milan, Little Italy’s new restaurant, than veggie meatballs…but that’s what stuck out to me because I rarely see them.

Milan, described in its news release as a “dining destination where food meets fashion” (hopefully not literally…otherwise I’ll bring my bib), opens Friday and offers a fairly extensive menu of Italian classics with some fun twists.

Who can say no to homemade ravioli with lobster, crab AND shrimp, topped off with a pink peppercorn cream and citrus pistachio gremolata? Or a filet mignon with walnut gorgonzola butter? And for dessert, it’s not just cheesecake — it’s honey ricotta cheesecake. I wonder what my Italy-born great grandfather would think of that.

I have to take issue with one part of the menu though — the prices are listed in euros and dollars, which to me is a little pretentious. Sorry folks, but I don’t care if we’re eating Italian food in a “destination dining” establishment — no amount of trickery will make me forget that I’m really still in Baltimore.

The menu looks good though and while the entrees get pricey (the ribeye is $44) most of the menu is reasonably priced between about $10 for a salad and $16-$26 for entrees.