Gibbons closure: what’s to become of the Babe Ruth legacy? 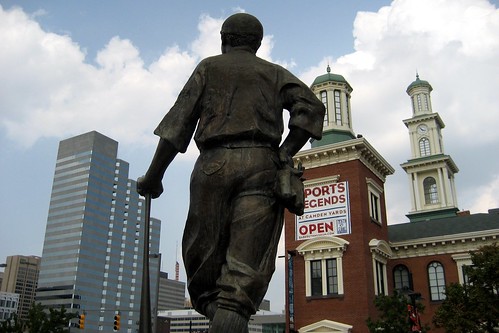 Questions are swirling about what will happen to the Cardinal Gibbons School property if parents are unable to succeed in keeping the school open. Aside from the emotional connection many people have to the school, there’s one glaring historical reason that property might be worth saving:

Ruth attended the school from 1902-1914 back when it was St. Mary’s Industrial School for Boys and played baseball there until he was signed into the minor leagues by the Baltimore Orioles. The original Yankee Stadium may have been “The house that Ruth built,” but the baseball field at Cardinal Gibbons is where Ruth first became a star.

The Archdiocese of Baltimore says it doesn’t know what it wants to do with the properties of the 13 schools it’s closing this summer. But for the sake of preserving history, special consideration should be made for the Cardinal Gibbons property — or at least the ball field. I’m told it’s also something the Babe Ruth Birthplace Museum here in Baltimore is keeping an eye on.

If efforts to keep the school open fail, should Baltimore still fight for this property’s preservation? On the one hand, we are talking about a square of dirt, some bases and a backstop. And the baseball diamond’s alignment today is not the same alignment as it was when Ruth played. But on the other hand, it’s one more piece of history in Baltimore that could be saved from a bulldozer — and if it’s preserved smartly it could be another tourist attraction for the city.

Should Major League Baseball, the Baltimore Orioles or the New York Yankees step in to do something about this?