What a new ACC television deal could mean for UMd. 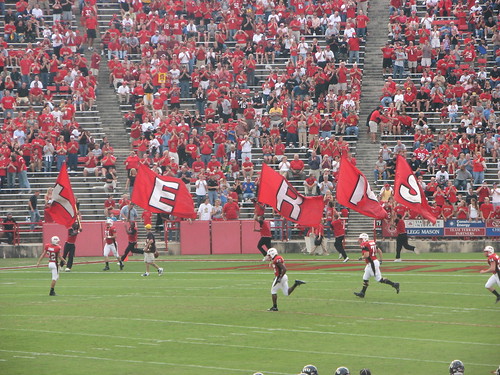 All an Atlantic Coast Conference spokeswoman and a spokesman for ESPN will say is “negotiations are ongoing.” Representatives from University of Maryland’s Department of Athletics won’t even talk about it.

But unconfirmed reports are running wild on the Internet and it appears Maryland and the ACC’s 11 other schools are due for a huge financial boon in 2011 as the conference nears a television deal that could increase each school’s share by roughly $7 million per year.

According to reports, the ACC has reached a 12-year, $1.86 billion television deal with sports giant ESPN, doubling the conference’s broadcast agreement with Raycom Sports and ESPN, which ends at the close of the 2010-2011 season.

Citing unnamed sources, the Sports Business Journal reported Monday that ESPN will pay the ACC $155 million a year to broadcast the conference’s football and basketball games through the 2022-23 season, more than double the approximately $75 million the ACC is making now.

Charlotte-based Raycom will continue its long association with the ACC by subleasing games from ESPN for regional syndication.

Maryland’s Department of Athletics serves 27 sports teams and has an annual expense budget of approximately $55 million, according to the school.

Translation: $7 million more a year will put each school’s share at about $13 million. That’ll make a nice difference for a school considered to have a mid-sized budget. And let’s not forget the cuts Maryland had to make in this most recent year’s athletics budget (for more details click here.)

And for the cherry on top of the sundae, rumors have it that Maryland could get an even bigger slice of  conference revenue sharing pie — but not with the ACC. According to The (Newport News, Va.) Daily Press’ Teel Time blog, the Big Ten Conference’s planned realignment could include Maryland. No one’s saying anything yet (again, unnamed sources cited here) but money-wise it’s huge: Big Ten schools receive about $22 million per year.

For you math nerds, that would be a near-quadrupling of Maryland’s conference money (although Maryland would have to play in a historically much tougher conference).

Either way it appears good financial times are ahead for Maryland athletics. Now about that football team …

×
Enjoy This Free Article.
We Have 2 More For You.
All You Need To Do Is Register To Receive Your 2 Additional Free Articles.
ACC ESPN finance football money terps University of Maryland 12:39 pm Wed, May 19, 2010 Maryland Daily Record
Liz Farmer