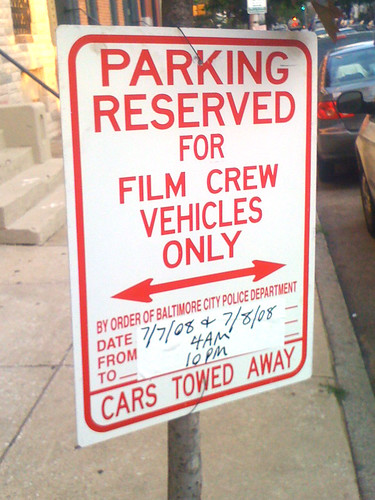 This gubernatorial campaign season’s going to be a doozie — and it looks like one of the battle grounds will be Maryland’s ability to attract film and television productions.

On Wednesday, Republican candidate and former Gov. Robert L. Ehrlich Jr. announced he would invest $7 million in a key state tax credit to help bring back to Maryland the major movie and TV projects that have provided hundreds of jobs. He’s talking about the state’s Film Incentive Fund that in the last four years has been whittled down to about $1 million. In 2005, the fund was allotted $6 million.

The fund allows the state to woo producers by offering them tax credits and other incentives to film here. With less money, it’s harder to attract productions. I recently wrote about the fund’s impact when Maryland failed to snag Hollywood’s first lacrosse movie.

Like a good politician, Ehrlich used the press conference as a chance to cast blame on his competitor, Gov. Martin O’Malley. Apparently it’s all his fault that the state’s unemployment rate has doubled since 2006 (Ehrlich’s last year as governor). I thought the national recession had a lot to do with it but then again, what do I know? I’m just a business reporter.

Sarcasm aside, here’s what Ehrlich had to say at the press event, held at Hunt Valley’s Renegade production studios:

“Cutting this tax credit is no different than cutting jobs,” he said. “We all benefit from the jobs production companies bring to Maryland, and the money they spend on salaries, hotel rooms, restaurant meals, transportation, security, even dry cleaning and entertainment. It’s an expenditure that produces a huge return on a small investment, and we ought to return Maryland to the forefront of TV and film production. When I’m governor, we will.”

When it comes to the arts — even if it benefits businesses — campaign promises are especially hard to keep. If elected, do you think Ehrlich can do this?