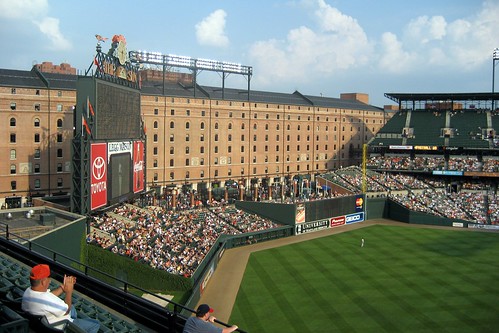 Nope — that’s not a typo. It seems counterintuitive, right? The Orioles are stinking up the ballpark something fierce this season, losing 21 of their last 26 and with a 20-52 overall record.

But attendance is up more than 3 percent this year. And at one point (just after their last home stand against Boston) it was up by 10 percent.

What makes these numbers even weirder is that the Orioles have had more games this year than any other year in Camden Yards’ 18-year history in which less than 10,000 people attended. Two games against Kansas City and one against Tampa Bay have fit that bill so far.

Now that I have you scratching your head, I’ll break it down for you. The reason is simple and it’s not good news for the Orioles.

The New York Yankees and Boston Red Sox are Camden Yards’ guaranteed big draws, right? Last year up to this point in the season and of those two teams, Baltimore had only hosted New York twice and Boston not at all. Plus, the first New York series was also the season opener, essentially taking away one day of New York’s impact because Opening Day always sells out.

By contrast, this year Baltimore has hosted the Yankees twice and Boston twice.

So there you have it — that more than makes up for the difference in attendance so far this year. The Nationals were in town this weekend, and even without their phenom Stephen Strasburg pitching, the Nats have drawn well at OPCY in the past and there’s no reason to expect they wouldn’t again this year.

But with just one more New York and Boston visit for the rest of the season (surrounded by a slew of traditionally poorly-drawing teams), we’ve got nowhere to look but down from here.