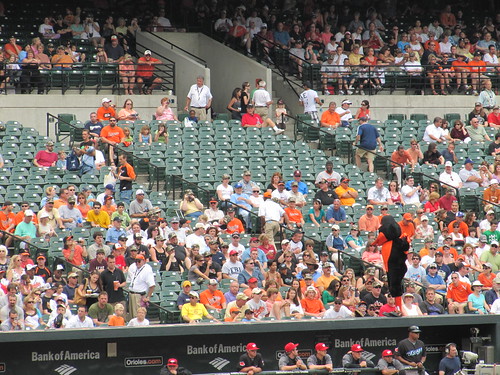 The Baltimore Orioles are ranked 20th out of the Major League’s 30 baseball teams in popularity, according to a Harris Interactive poll released this week. That’s down from last year’s ranking of 17th. The poll was conducted June 14 to 21.

But hey, at least they beat the Washington Nationals (ranked 27th). At first that was a surprise to me considering the poll was conducted during the Stephen Strasburg Era. After all, you’d think a phenom pitcher would give the Nats, who also came in last year at 27th, a few more points. But baseball in D.C. is still young and the fanbase is fickle. And while Strasburg may be a rock star here, nationwide, he’s just somebody you don’t want pitching against your team.

Meanwhile the New York Yankees are ranked first for the eighth-straight year. The Boston Red Sox are ranked second. If he saw the results before he died this morning, that had to give owner George Steinbrenner one last smile.

Here are some more interesting fun facts from the poll:

Over one-third of Americans (36%) say they follow Major League Baseball, a number that is down from last year when 41% said they followed baseball and 40% said so in 2008. Looking at who follows baseball, men are more likely to do so than women (46% versus 27%). Also African Americans are more likely to be followers of the sport, compared to both Whites and Hispanics (41% versus 36% and 34%). There is also a regional divide, as almost half of Easterners (48%) say they follow baseball, compared to one-third of Westerners (34%) and 29% of Southerners.