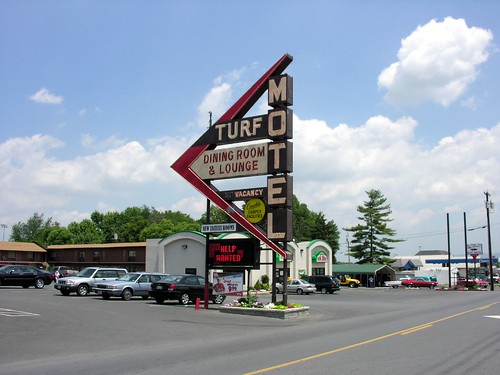 Hotels love ’em. Gas station operators are big fans of the extra customers at the pump. But West Virginia, Delaware and Pennsylvania casinos, which I describe in today’s story about table games as “islands of gaming,” don’t have much of a direct impact on other surrounding businesses.

At the Hollywood Casino at Charles Town Races, the co-owner of the nearby Turf Motel is ecstatic about the new gaming that’s attracting more gamblers. That means more customers for the Motel, which is planning an expansion to accommodate the expected boom.

After the casino opened, the Turf’s occupancy rates shot up from about 45 percent to 65 percent, said Ron Marcus.

“With table games my only hope is it’s going to increase another 20 [points],” he said.

At the Holiday Inn Express, occupancy averages 90 percent on the weekends — at about $160 per night.

“Most of time what they’re here for is the casino,” said General Manager Nelson Parkinson.

But hop in the car and drive a half-mile into town and the businesses on sleepy Charles Town’s main drag seem unaffected by the excitement just up the road. Unlike the casino’s parking lot, the cars parked here all boast West Virginia license plates.

The storefronts are mostly service firms (like law offices), eateries and consignment shops. Not much to sway the casino crowd, who can chow down in one of Charles Town’s five restaurants or the food court for a bite. (The casino is also opening a high-end steak restaurant this fall.)

“I don’t get a lot of casino traffic,” said Dan Vaira, the owner of The Dish, a farm-to-table bistro. “They have food at the track.”

For a little further “investigation,” photographer Max Franz and I dipped into the new ice cream shop on Washington Street to go spoil our dinners. There we found people taking a break from work, friends chattering about their days, moms with kids … but no tourists. Except us, of course.