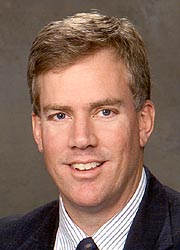 The House of Delegates work group formed this year to study Maryland’s business climate has been meeting with business leaders the state since the General Assembly concluded, the work group’s co-chairman said Wednesday.

Del. John L. Bohanan Jr., a St. Mary’s Democrat, said one meeting of the 10-member group was with Milt Peterson, a Virginia developer whose Peterson Cos. built National Harbor in Prince George’s County.

“We have a bad reputation, especially when it comes to Virginia,” Bohanan told a meeting of economic development professionals at the Southern Maryland Higher Education Center in California. “We need to take a good honest assessment.”

He said lawmakers were soliciting thoughts from business leaders on how to improve Maryland’s business climate in order to attract and retain businesses in the state. The group will then take recommendations back to the 141-member House.

×
Enjoy This Free Article.
We Have 2 More For You.
All You Need To Do Is Register To Receive Your 2 Additional Free Articles.
bill frick galen clagett house of delegates kumar barve National Harbor peterson cos. st. mary's county 4:41 pm Wed, June 12, 2013 Maryland Daily Record
Alexander Pyles