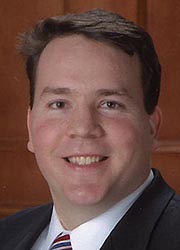 Former state Sen. Alex X. Mooney, who resigned as chairman of the Maryland Republican Party in February, said Tuesday he had raised more than $100,000 for a congressional bid in West Virginia’s 2nd District.

The Republican, who represented parts of Frederick and Washington counties for more than a decade before leaving the Senate in 2011 to become chairman of the state GOP, said in February it was “time … to pursue other ventures.”

Mooney announced his candidacy in West Virginia on June 3. A campaign statement said the $100,000 had been raised since then.

“The enthusiastic response I have received from supporters in June since officially announcing my campaign has been very encouraging,” Mooney said in the statement. “People want a leader who will defend their conservative values.”

Mooney now lives in Berkeley County, W.Va. The Gazette reported in March that some Maryland Republicans were surprised Mooney would leave the state, but understood why after Maryland’s 6th Congressional District —  a potential Mooney target — was redrawn to include a large swath of Montgomery County, where most voters are Democrats.