Haddaway-Riccio excited to be Craig’s pick 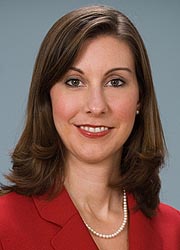 Del. Jeannie Haddaway-Riccio, a Middle Shore Republican who lost her job as the House of Delegates‘ minority whip in a leadership shake-up this year, said Friday she will be formally announced as Harford County Executive David R. Craig‘s running mate next week.

“This is an exciting time and I hope you will join me for my official announcement with David Craig,” Haddaway-Riccio wrote on her verified Twitter and Facebook pages.

She said the formal announcement would come on Tuesday at 10 a.m. in Annapolis, followed by a second event in St. Michaels at 5 p.m.

Lt. Gov. Anthony G. Brown, a Democrat, picked Howard County Executive Ken Ulman in May for his ticket. Maryland Attorney General Douglas F. Gansler, who is expected to announce his candidacy for governor in September, has not named a running mate.