Brown gets endorsement from Hoyer, Miller 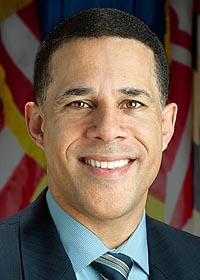 Both Hoyer and Miller commended Brown for his service as a colonel in the United States Army Reserves and said he would help to drive economic growth in Maryland if elected governor.

“Anthony Brown’s years of public service leadership — whether fighting for our country overseas, or helping to lead our great state — makes him the best choice to serve as Maryland’s next governor,” Miller said in a statement. Hoyer said he would “work hard to make sure that they win this critically important race.”

The endorsement of the powerful Southern Maryland Democrats comes on the heels of support from U.S. Reps. Elijah Cummings and Donna Edwards, as well as Gov. Martin O’Malley.

Brown, who in May selected Howard County Executive Ken Ulman as his running mate, was the first Democrat to formally enter into the race. Del. Heather R. Mizeur, a Montgomery County lawmaker, joined in last week and Maryland Attorney General Douglas F. Gansler has started a statewide policy tour and plans an official announcement in September.