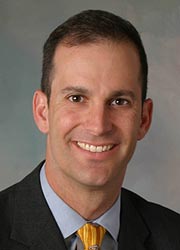 The Baltimore County Democrat on Monday became the first to officially announce his candidacy for the job in a video posted on his campaign website. In the video, images of him jogging through a neighborhood are paired with testimonials from supporters.

Cardin says the early morning exercise routine — about five or six miles a day a few times a week — helps him clear his head, and he’s using his habit as a campaign tagline: “Run with Cardin.”

Whether voters will is up for debate, as at least three other state lawmakers have expressed serious interest in the position. In an interview after his announcement, Cardin said cyber security and issues surrounding technology would be his focus.

“Maryland families today are facing challenges and issues that we never dreamed of when I was a kid,” Cardin said. “Maryland is the hub … of cyber security in the country. We should be a place where people feel secure with all their electronic communications and their identities. I have made it my business to accentuate the fact, that is part of the job of the next attorney general.”

A member of the House of Delegates since 2003, Cardin’s campaign announcement emphasized legislation he sponsored last year that made it a misdemeanor to harass a minor online. The “cyber bullying” legislation drew significant attention, and even spurred Baltimore Ravens running back Ray Rice to testify in favor of the bill. It was signed into law by Gov. Martin O’Malley in May.

Though he is the first to formally enter the race, Cardin is likely to face fierce competition in next year’s Democratic primary. Sen. Brian E. Frosh and Del. C. William “Bill” Frick, both Montgomery County Democrats, are planning potential attorney general campaigns, as is Del. Aisha N. Braveboy, a Prince George’s County Democrat.

Frosh — who chairs the Senate Judicial Proceedings Committee — is seen by most observers as the frontrunner, especially after he successfully guided sweeping gun control legislation through the Senate this year. Frick, meanwhile, had a strong showing in a straw poll conducted at the Western Maryland Democratic Summit in April.

Others have said Cardin, despite not quickly rising in the House leadership ranks, could have a distinct advantage, in part due to his famous last name.

Todd Eberly, assistant professor of political science at St. Mary’s College of Maryland, said the race still appears to be Frosh’s to lose, with much of the Democratic machine in Maryland lining up behind the Montgomery County senator. But Cardin’s official entrance gave Eberly pause.

“The Cardin name in Maryland isn’t necessarily anything you want to discount,” he said. “It sets the stage for what could possibly be a very contentious campaign for the nomination for attorney general.”

That would add intrigue to a race that was easily won by incumbent Attorney General Douglas F. Gansler in 2010, who ran unopposed in the primary and general elections. Gansler intends to announce his candidacy for governor in September, clearing the way for a successor.

If the campaign does indeed become contentious, Cardin may have to relive an embarrassing 2009 episode in which he used Baltimore police officers in a staged marriage proposal. The delegate apologized and later wrote a check to city police to cover the cost.

“We all do crazy things for love, and the most amazing thing is she said yes,” Cardin said. “Marylanders have many more important things to focus on than how I proposed to my wife.”