We need to create jobs that pay people a living wage. That is a baseline premise that should not be controversial. A “living wage” would provide a stable platform from which to push for wealth-building throughout Baltimore — an issue of particular significance in communities of color.

So, how would one go about building wealth in the communities outside of the area writer Alec MacGillis referred to as the “Baltimore Idyll“? At the top of my list of empowering job creation ideas is an effort spearheaded by the Democracy Collaborative’s Community Wealth project. Known as the “Cleveland Model” and based on the worker-owned cooperatives that were created in low-income communities there, the model leverages the purchasing power of anchor institutions to develop businesses in which employees have an ownership stake.

According to the Community Wealth project, “all worker cooperatives have two common characteristics: 1) member-owners invest in and own the business together, and share the enterprise’s profits, and 2) decision-making is democratic, with each member having one vote.” Worker-owned cooperatives differ from other business models in that a traditional company’s profit flows up to a small group in the ownership/executive suite. Within a cooperative, the profit-taking and salary structure are dramatically different, given that each worker votes on compensation.

In Cleveland, foundations and funders helped launch the Evergreen Cooperatives, which are worker-owned, for-profit businesses based in low-income communities that collaborate with anchor institutions — hospitals and universities like the Cleveland Clinic and Case Western University. The anchors agree to procure goods and services from the cooperatives. The video below explains the power and the simplicity of the concept. For those in Baltimore, large hospitals and universities should sound familiar. We have world-class higher education and health care institutions in the city and they have tremendous procurement needs. 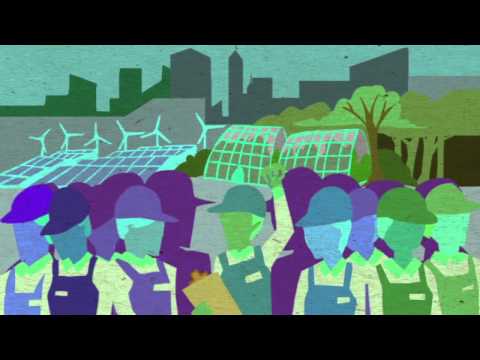 The bolstering would occur on several levels. First, with each cooperative guaranteeing its owners at least a living wage, the workers would have money to spend where they work and live, which benefits the surrounding neighborhood and could be a catalyst for growth of other businesses. Further, cooperatives can and should, by design, be open to training and hiring individuals that have had difficulty gaining employment elsewhere because of a criminal record or time out of the workforce. Then, each worker is able build wealth through ownership in the entity, sharing of the profits and has the power of self-determination through the democratic process.

Several established businesses in the city are already utilizing cooperative ownership. For example, Red Emma’s bookstore and restaurant has approximately 20 worker-owners and Baltimore Bicycle Works has six worker-owners and three apprentices who are owners-in-training. Both cooperatives make some or all decisions, in Red Emma’s case, by consensus.

Worker-owned cooperatives are not a recent innovation but the concept remains in the nascent stages in the United States. Elsewhere, there are thriving cooperatives, the most celebrated being the MONDRAGON Corporation based in Spain. Founded by a Roman Catholic priest in 1956 in an economically depressed area of the county, MONDRAGON is now a group of 257 international companies that employ 74,060 people. Yet, this multinational company espouses values that are not regularly boasted by large corporations. The cooperative group “seeks to establish a fairer and more caring company that respects the freedom, dignity and development of both the individual and the community.”

Freedom, dignity and a share of the profits sounds like plan many of us could support. Those interested in bringing the cooperatives to fruition, please contact Stephanie Geller, the Community Wealth Building Coordinator at University of Maryland’s School of Social Work.