We’re not sure what Prince George’s County Executive Rushern L. Baker III expected to encounter while serving as a campaign surrogate for Martin O’Malley at a recent Democratic presidential debate in South Carolina, but it probably wasn’t a close encounter with a disrespectful hand puppet.

A somewhat-amused-and-slightly-confused-looking Baker can be seen talking with Triumph, The Insult Comic Dog in the latter’s new election special that premiered on Hulu.com this week.

For those not already familiar with the antics of Triumph, who is known for his many appearances on the late-night talk shows of Conan O’Brien — where he made his debut nearly 20 years ago — here’s the short version: he’s a cigar-chewing dog puppet who specializes in mercilessly skewering everyone in his path. That’s pretty much it.

Portions of the special can be seen on YouTube (WARNING: The entire video is below and contains adult content and general misanthropy).

At one point Triumph, voiced and puppeteered by comedian Robert Smigel, approaches Baker, telling viewers that “this is what it’s come to: a Martin O’Malley spinner is begging for me to talk to him.”

Baker offers a good-humored chuckle and replies, “You got me.”

Triumph then calls Martin O’Malley (who has since left the race) a great candidate — to which Baker agrees — before saying that people may not realize it, but that O’Malley was the basis for the mayor character on “The Wire.”

“So I heard,” Baker says. “But he was a great mayor when he was mayor of Baltimore.”

But Triumph/Smigel is just warming up.

“And Martin O’Malley’s campaign is the basis for the title of the movie ‘Trainwreck,'” Triumph declares.

Triumph appears to agree, but, alas, it’s another ploy.

“You’re right,” the dog declares. “He’s one percent ahead of Mario Lopez in the polls right now!”

Baker offers a patient smile, and Triumph moves on to another target: O’Malley himself.

“Does it concern you that you were only visible to people watching the 70-millimeter version of the debate?” Triumph asks.

O’Malley also appears to laugh along, telling the puppet that “I’ve enjoyed your shtick.”

All things considered, both O’Malley and Baker came off looking better than many who cross paths with the Triumph, especially considering that Baker doesn’t appear to have known what he was getting into when he agreed to talk to the puppet.

A Baker spokesman said Thursday that “the county executive was not aware of the level of celebrity that was interviewing him at the time.” 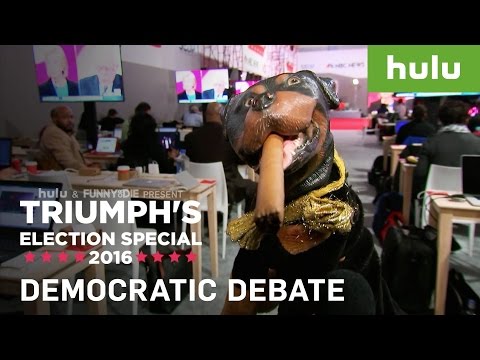