A paramount event in my legal career

I had the distinct honor recently of being admitted to the bar of the United States Supreme Court with a group of my fellow DOT attorneys. While surprising to some, considering my reputation of being a Supreme Court nerd, I had not visited the Supreme Court or attended oral arguments prior to my admission to the bar. The often-long public line was a strong deterrent to observing the court’s proceedings. The opportunity to skip the line and be admitted in open court was not something I was going to pass up.

The requirements are simple: you must have been admitted to practice in the highest court of a state (or D.C.) for at least three years prior to admission; you must not have been the subject of any adverse disciplinary action during that three-year period; and you must appear to the court to be of good moral and professional character. All it takes is a form, two current bar members to sponsor your application, and, if you chose, a member of the bar to move your admission in open court. (You can also apply on a written motion.)

Our small group admission occurred in open court on Feb. 27. Our group and guests were ushered into the Court’s East Conference Room to await instructions and start of the session. The beautiful room which is adorned by portraits of the first eight chief justices. The East and West Conference Rooms are frequently used for official court functions, including swearing in of new justices. 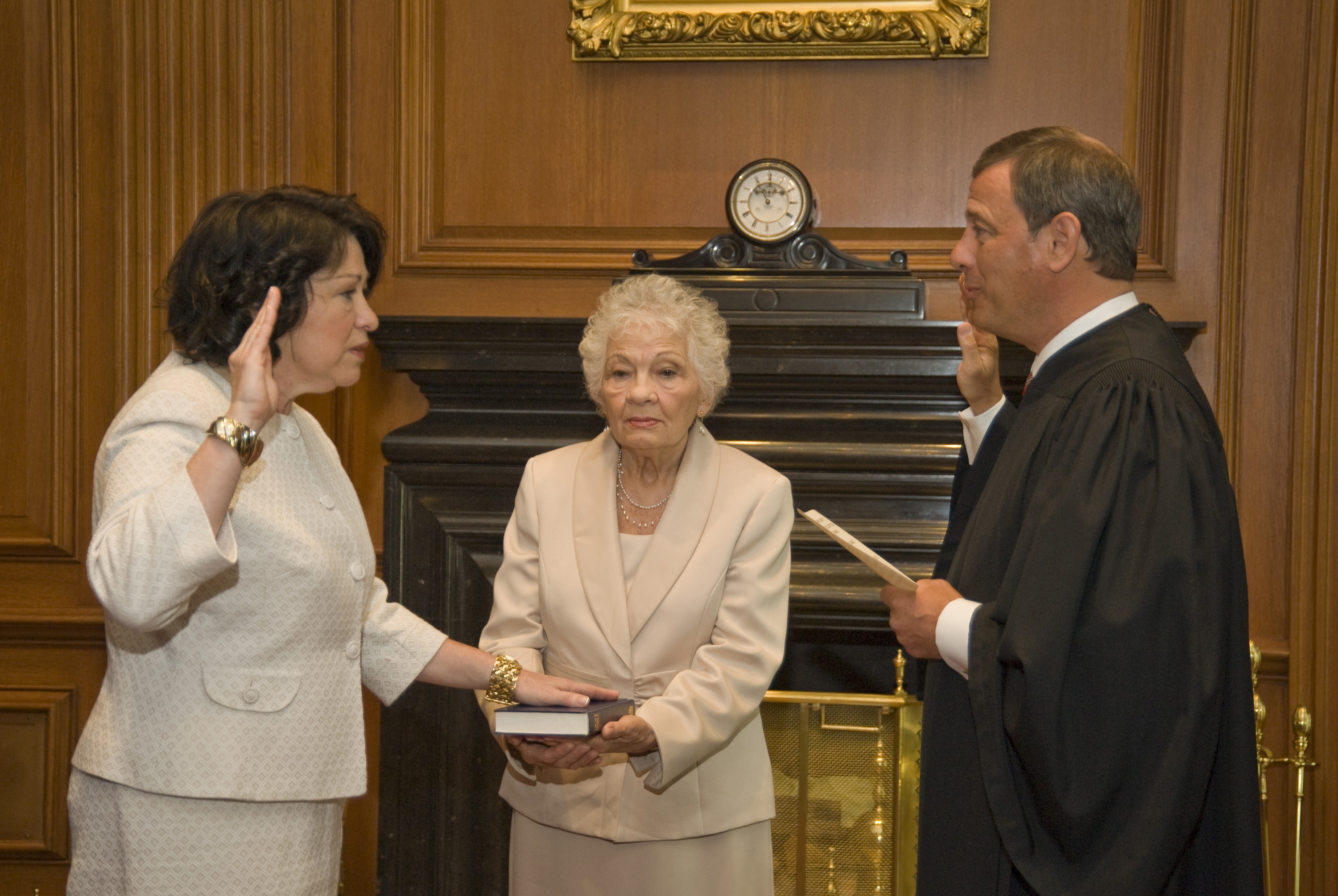 Justice Sonia Sotomayor being sworn in in the East Conference Room in August 2009. (In case you’re wondering, the fireplace is operational and there was wood, kindling, and matches next to it while we waited.)

The clerk of the court then greeted and congratulated us on being admitted to the court. He ran through the process, ensured that our movant had her “script” and reminded her not to forget to attest to our qualifications before the court. (Apparently, Chief Justice John G. Roberts Jr. likes to poke fun at movants who forget this key element.) We were then put in order based upon our bar admission state and ushered into the courtroom.

At exactly 10 a.m., the court assembled and the marshall cried (“oyez oyez oyez”) the court to order. Since there were no opinions being released that day, the first item on the agenda was our admission. Individual admissions motions were made, and then our deputy general counsel addressed the Court and moved our admission. The chief justice quickly granted our motion and we were sworn in by the clerk. Two cases were heard immediately after our admissions, Packingham v. North Carolina, and Esquivel-Quintana v. Sessions, both presenting fascinating questions of law.

After the arguments, we left the courtroom and waited for an arranged lecture by a Supreme Court historian. The historian brought us back into the courtroom and spoke to us about the history of the court, the building, and provided interesting facts. For example, did you know that each justice has designated seats for guests based upon seniority and the guests must sit in their justice’s assigned seat, even if other seats aren’t being occupied? Afterward, our group split up and a few of us toured the building on our own. My girlfriend and I opted for a quiet lunch to celebrate my admission.

Notwithstanding the new certificate to add to the wall, the experience of the in-person admission is a special moment in my legal career. Being admitted to the Supreme Court bar is a great privilege for any practicing attorney and I wholeheartedly recommend to any qualified attorney that they seek admission.