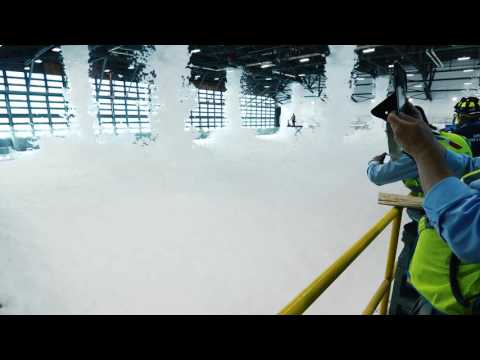 You’ve heard of foam parties, but did you ever wonder what it would look like to fill an airplane hangar with fire-retardant foam?

Baltimore-based Reliance Fire Protection Inc. recently did a test of a fire suppression system at a 40,000-square-foot hangar at Reagan National Airport. In the test, Reliance blasted a foam layer 10 feet deep in the hangar, filling it with about 400,000 cubic feet of foam, enough to fill roughly four-and-a-half Olympic swimming pools.

To record visual evidence of the the test, Reliance brought along Kapowza, a creative agency also in Baltimore, to make a video of the test.

“The scale of the foam coming from the ceiling and just filling up the room so quickly is crazy,” said Sean Sutherland, an account manager at Kapowza.

“This is not something you see every day,” he added. “If you’re in the industry, I’m sure it’s a cool experience, too, but being an outsider, learning the industry, what’s all involved with fire protection services, everything has been really interesting. And this foam test was just icing on the cake.”

Reliance Fire Protection has been working with Kapowza on a retainer agreement that began in January and was renewed in July. Kapowza started by making new branding for the company, with a new logo, letterheads and templates. When it came time to test the foam system in May, Kapowza worked with CharmCine of Baltimore to shoot the video. Kapowza handled post-production.