Maryland ramps up Baltimore rail spending as riders trend down 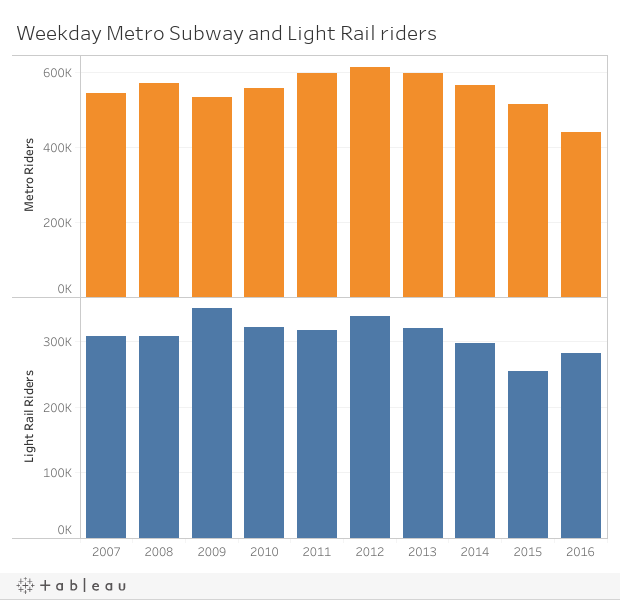 Maryland Department of Transportation Maryland Transit Administration plans on funding $900 million in upgrades to metro subway and light rail systems’ infrastructure over the next several years. Improvements include spending $400 million on 78 new Metro Subway cars and $150 million to renovate the state’s fleet of 53 Light Rail vehicles.

But a review of state data shows weekday ridership on the services between 2007 and 2016 generally trending down after peaking earlier in the decade.

Available state data counts “the number of transit patrons making a one-way trip on any mode per weekday,” according to the state, and the estimates excludes holidays.

Ridership trends for light tail are slightly more varied. Weekday light rail ridership peaked in 2009 at 349,351. Trips on the service declined during the next two years, but increased to 337,916 in 2012.

The number of riders making one-way trips then dropped over the next few years before bottoming out at 254,549 in 2015. The following year weekday trips rebounded by nearly 27,000.

Ridership numbers provided by the state on Thursday recorded average passenger numbers through fiscal year 2018, which started July 1, 2017 and ended June 30. It’s unclear if these figures are being tallied using the same method the state has previously used to count ridership.

The average weekday ridership for light rail for fiscal year 2018 was 23,335 riders a day, according to the most recent totals from the state. Average Metro Subway ridership, which was closed for track repairs in February, was estimated to be 17,000 passengers on weekdays.

Ridership on both services is expected to be down this year because of maintenance work.

Service to light rail’s five most northern stops will be temporarily halted next month. Starting Sept. 14 and running through Oct. 4 trains will not go to Hunt Valley, Pepper, McCormick, Gilroy, and Warren roads because of scheduled rail maintenance.

Metro Subway, which already endured a month long shutdown this winter, will also be undergoing more work starting Sept.14 and running through Nov. 4. Work on the rails will be done on the weekends but the service will be single track at all times during repairs.