Invade the Waterfront yourself

In case you don’t watch TV or listen to the radio in the Baltimore-Washington region (in which case you’re probably not reading this blog, but I’ll continue), and you’ve missed the massive advertising campaign for Baltimore’s Waterfront Invasion — fear not. The cheap fun to be had is just beginning. 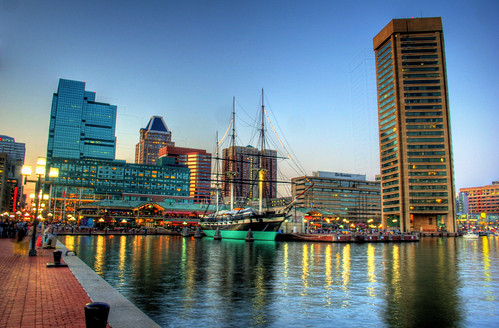 The “invasion” includes events and promotions based on the Chinasaurs: Dinosaur Dynasty and Jellies: Oceans Out of Balance summer exhibits at the Maryland Science Center and National Aquarium respectively.

The Waterfront Wiggle Free Concert Series held Saturdays at 4 p.m. at West Shore Park through September 5. Sponsored by the Waterfront Partnership of Baltimore, the series features a variety of bands from steel drums to pirate musicians.

The Waterfront Invasion Free Outdoor Movie Series held Wednesday evenings in July at West Shore Park. Sponsored by the Waterfront Partnership of Baltimore and ASG Events and Promotions, evenings include a screening of a classic “invasion” movie plus interactive games, activities, snacks and music beginning at 7:30 p.m.

ASG Sports and the Pepsi Bottling Group are presenting Free Youth Sports Clinics in conjunction with the West Shore Park movie series on Wednesday evenings in July from 6:30 until 8 p.m. The series will feature special guest instructors from the Baltimore Blast, Washington Freedom and Baltimore Bayhawks. Space is limited to the first 150 participants, ages 5-14. Registration is on site, the day of the event.

The Summer Live! Concert Series hosted by Harborplace will be on Saturdays at 8 p.m. and Sundays at 5 p.m. All performances are free and family friendly at the Harborplace Amphitheater and include a mix of jazz, blue, pop and rock musicians.

Seems like most of these free events are for families or at least not geared toward 20-somethings, younger couples or college students home for the summer or interning in the city. Which isn’t to say that younger couples wouldn’t attend these events for a night out…but those who don’t want to spend their night out with other people’s kids probably will take a pass.

How ’bout just one event for the younger crowd — is that too much to ask?

×
Enjoy This Free Article.
We Have 2 More For You.
All You Need To Do Is Register To Receive Your 2 Additional Free Articles.
Baltimore Inner Harbor Marketing Maryland Science Center national aquarium Tourism 4:26 pm Tue, June 23, 2009 Maryland Daily Record
Liz Farmer